STILL STANDING: THE COURAGE TO OVERCOME

Standing with her daughter and husband, waiting to celebrate her sister crossing the Boston Marathon’s finish line, her life forever changed.

Celeste’s Journey from Devastation to Triumph

Celeste’s sister decided to run the marathon. It was the first time she had ever run a marathon - it was also the first time anyone in Celeste’s family had attended the Boston Marathon.

I just had to be there. Not just along the route, I had to see her finish her first marathon, accomplish her first Boston Marathon.

“My sister and I are very close. I was just so proud of her,” she recalls. “I just had to be there. Not just along the route, I had to see her finish her first marathon, accomplish her first Boston Marathon.”

Waiting at the finish line she felt firsthand the same energy that everyone had always used to describe the experience of attending the Marathon: a true sense of community.

A group of spectators in front of her moved away from the finish line to meet their family and friends who had just finished. So, Celeste and her family stepped forward - excited to celebrate closer to her sister.

Instead, they became caught in the middle of both bombs.

From one second to the next, the world literally exploded

The first bomb replaced the crowd’s joyous energy with blackness and heavy smoke, while throwing Celeste to the ground. Celeste’s daughter Sydney was blown from her family, and experienced extensive injuries including the severing of her femoral artery.

Celeste was lying on the ground, in the midst of chaos, and in disbelief when the pain set in. “What brought me back to the moment was the severe pain in my legs,” she remembers.

Without hesitation, her husband used his own belt as a tourniquet to stop the bleeding from her legs. She recalls him once saying, “I saw your blood leaving your body with every heartbeat.” She knows his quick action saved her life.

Then the second bomb went off.

Reality of the situation had not yet set in when the EMTs arrived to take her to Boston Medical Center, where she was reunited with her daughter. Fortunately, after numerous surgeries, Sydney recovered. Celeste, however, would become a double amputee. 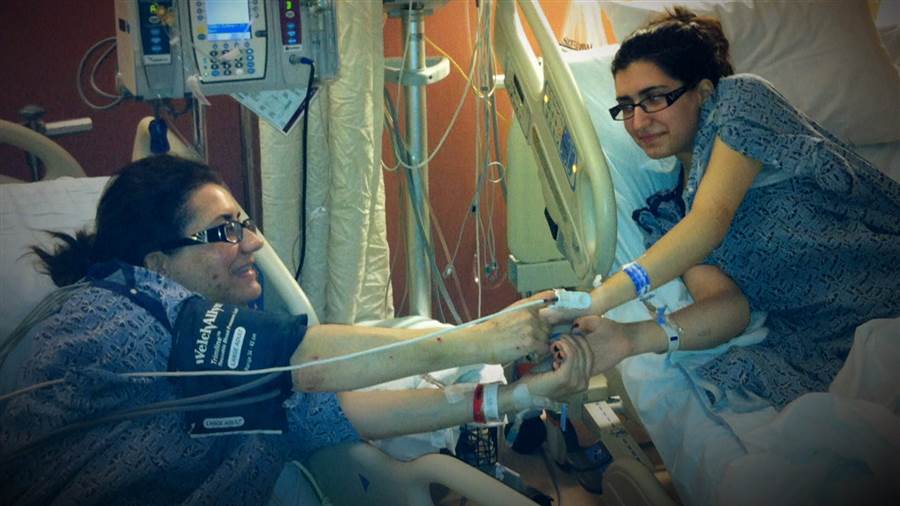 Throughout her recovery she experienced many obstacles, hardships, and emotions.

“It is hard to come to terms with the thought that your life is over. It will never be the same. I will never be active again,” she says.

Her first ray of hope came after a visit from “her” marine as she fondly refers to him. Gabe Martinez, a U.S. Marine veteran, who lost both his legs in Afghanistan after stepping on an IED, visited her in the hospital.

He could relate to her feeling of hopelessness but his reassurance was strong, “I am here to tell you that your life is not over. You will be stronger. This is not the end.”

My legs died that day. I miss my legs, but for me to take back control and continue moving forward I had to mourn the loss of my legs.

His encouragement empowered her, but she had to accept the loss of her legs before she could move forward. “My legs died that day. I miss my legs, but for me to take back control and continue moving forward I had to mourn the loss of my legs.”

Initially she was afraid of her new life, wondering what her future held. Would she walk again? Would she ever be active with her family? Would she walk down the aisle at her children’s weddings? But once determination replaced doubt, and perseverance replaced uncertainty, she took back control.

She worked with Prosthetic & Orthotic Associates (POA) in Orlando, FL to learn to walk on her prosthetics and regain her independence. Working with POA she began to feel that “nothing was taken from me that I can't get back. I can even be better than I was before." She embraced every opportunity to strengthen her body, even adding pilates to her healing process. 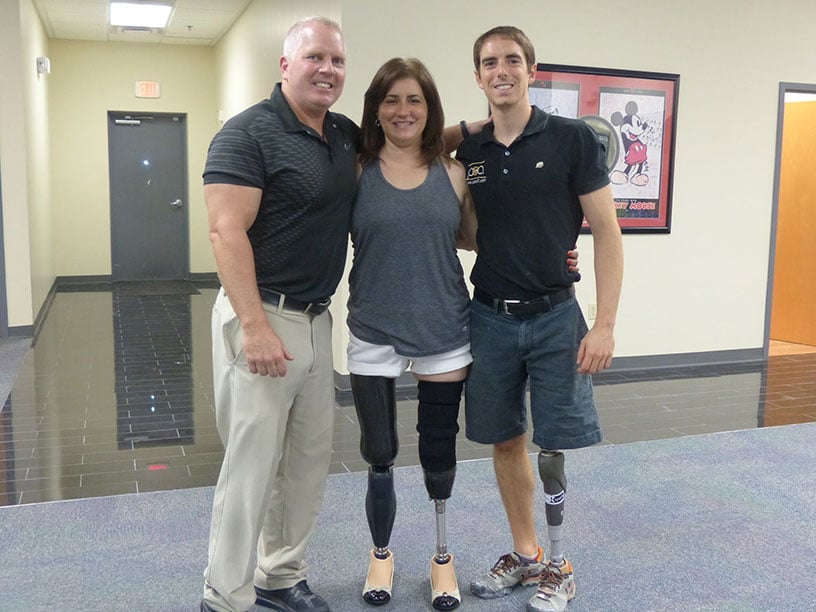 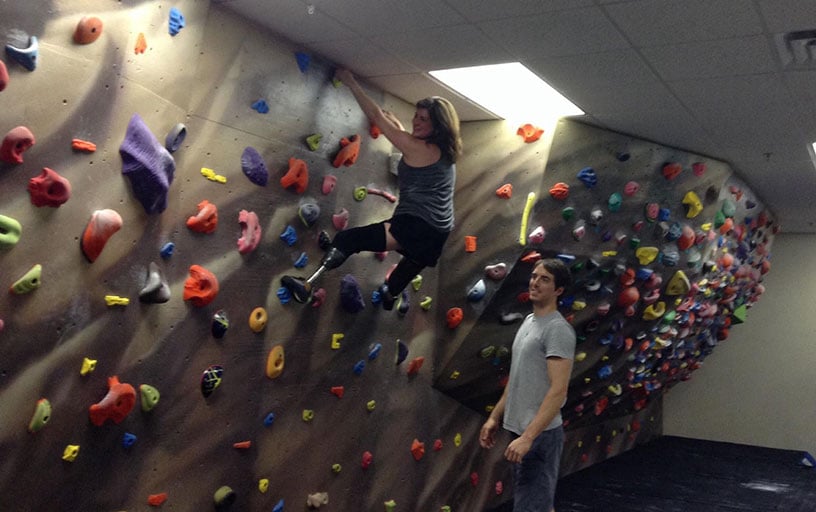 But her journey to wellness didn’t end there. She agreed to take part in Dear World’s Boston Marathon project which asked survivors and responders to return to the finish line to inspire healing.

Her message was “Still Standing”

I wrote still standing because the bombers hurt me—they took my legs—but I can still stand on them. I just love the play on the message. Writing it on my naked legs, seeing those words and having the prosthetics next to me. 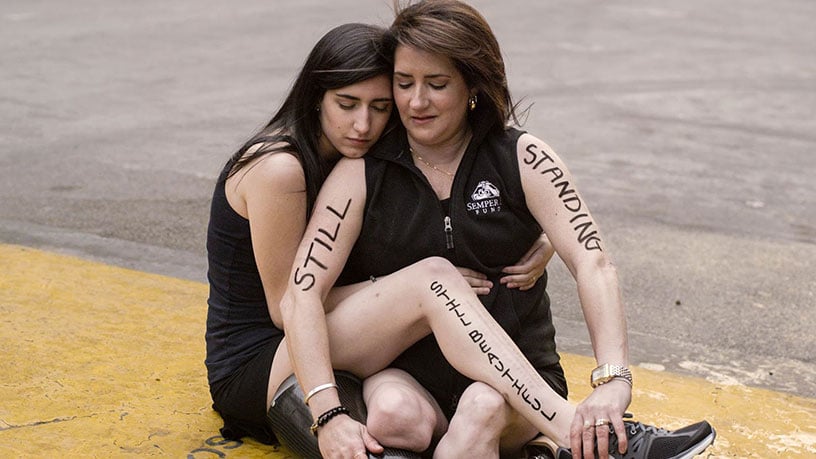 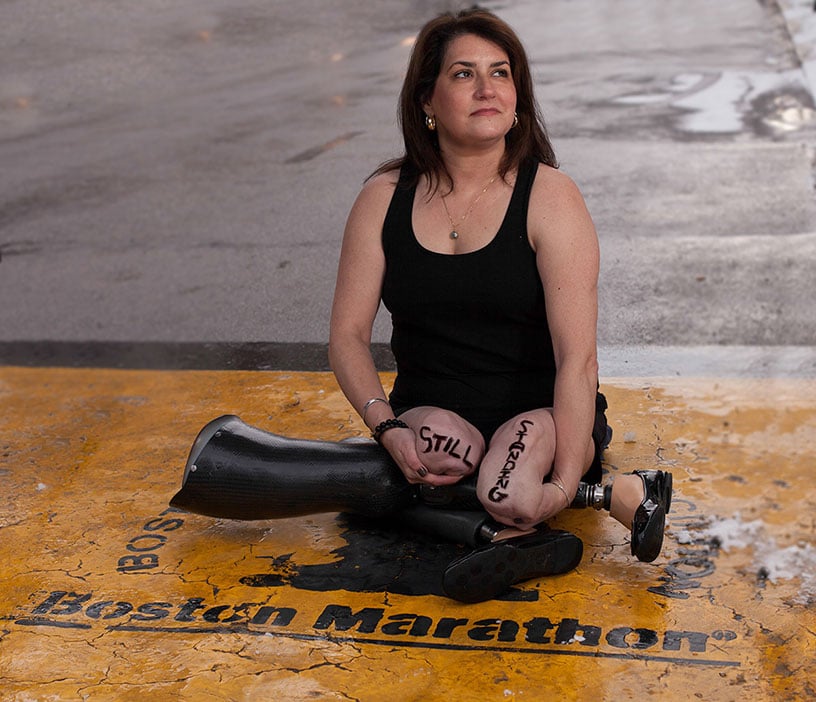 Then, came the time to return to the scene she describes as her once nightmare.

Her sister, having been unable to finish the race the year before, had a mission to run and finish the 2014 marathon. As her sister approached the finish line, Celeste and Sydney joined her to run across together. 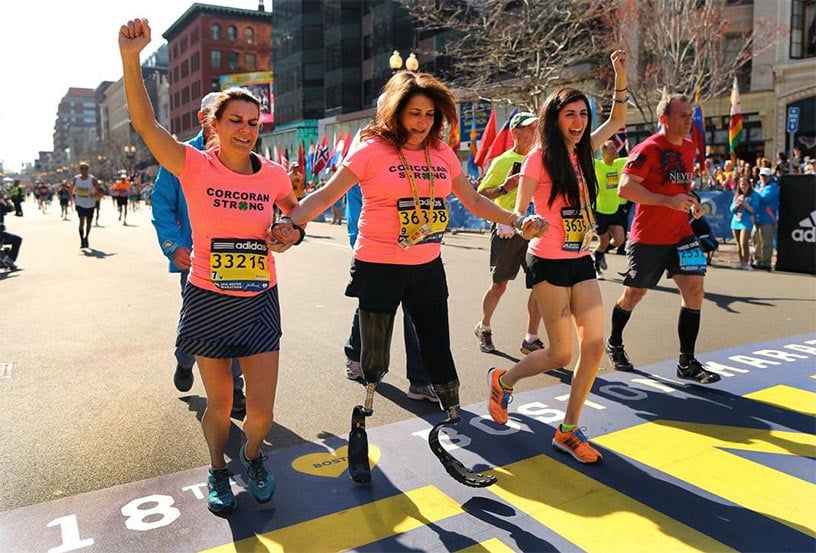 “That finish line had been such a negative space since the marathon. This was about reclaiming that space in a positive way. I took back control. I created new memories,” she said.

I took back control. I created new memories.

Celeste now works passionately to give back to others who have lived through traumatic, life altering experiences. She has partnered with 50 Legs, a charity founded by Steve Chamberland with a mission to provide amputees with the necessary care and prosthetics that they could not otherwise afford and to help them live a happier and healthier life.

She feels it is important to pay it forward by helping others, saying “I can’t change the world, but I can help people. I can show how much good there still is in this world.”

She and her family feel they all have grown closer as a result of surviving the bombing together, and can see normalcy starting to become routine in their daily life.

“The past 4 years have been filled with ups and downs but now, as a family, we are focused on not just being healthy but also happy.”

This experience was a turning point in her life, as she decided that after a lifetime of hating running - she was going to embrace it. This is where Gym Source is proud to join in her journey. She visited the Reading, MA Gym Source and met with equipment expert Caolan Donahue for help purchasing a treadmill.

I had running legs and I was determined
to learn how to use them.

“I had running legs and I was determined to learn how to use them,” she says. “Of course, there were a lot of obstacles in choosing a treadmill because of my circumstances and limitations, but we worked to find one. Luckily I was able to test a lot of them in store.”

Gym Source’s goal is to provide a personalized shopping experience for every customer who walks in the door. We carry a wide variety of brands, and we encourage everyone to try out the different options available for strength equipment, treadmills, ellipticals, or whatever anyone is looking to add to their home gym.

Celeste has overcome momentous challenges and it was important to our team to find the right equipment that supported her resiliency.

Ultimately, she chose a True PS825 treadmill for her home gym, which has helped her stay dedicated to living an active lifestyle.

“I feel powerful. Having the ability to run shows that nothing can stop me. That the terrorists did not accomplish what they set out to do, you took my legs, but I am still standing,” she says with pride.

I feel powerful. Having the ability to run shows that nothing can stop me. That the terrorists did not accomplish what they set out to do, you took my legs, but I am still standing

Gym Source Partners with championship-winning coach Tyronn Lue Weekend Warriors and Pro Athletes: More Alike Than You Might Think NEW YORK, NY, Sept. 22, 2020– What do people who love to…

Everyone knows about the health benefits of a regular exercise routine. Daily physical activity can help with weight management, strengthen muscle and bones and improve mental health and…

Straight Talk: What can Wearable Tech do for YOUR Training?

According to the American College of Sports Medicine’s Health & Fitness Journal® 2020 survey, Wearable Tech is the #1 trend in health and fitness. As technology develops, so does our…

Get our deals and news first!